The Big Bank, a musical written by the Seligmann brothers, opened the 2011 New York Musical Theater Festival on September 27th and premiered at St. Clements in downtown Manhattan.  Sold out for its entire duration, the show finally closed in October, promising to re-open on bigger stages of New York City. It was so remarkably popular that the producer, lyricist, and composer, Jacob Seligmann, himself couldn’t go in on the first night – he had to give up his ticket to seat the audience and press. 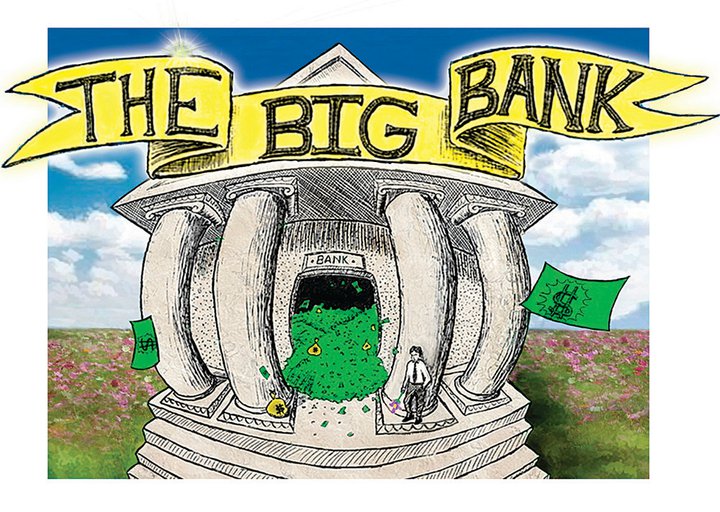 The play is about the Brooklyn Branch of the Big Bank, financed by The Bigger Bank, a subsidiary of The Biggest Bank, which is manned by the Boss (Klea Blackhurst) and five “suits”, who fear-worship their “queen” while being coached on how to rip people off their homes and businesses and take pleasure in it. They thrive on foreclosures: “We take the things you used to own”, “Your pain is our gain…” Their credo (or should I say “greedo”) is “We repossess and make you wish you’d never taken a loan!”

Minutes before the premier, we managed to squeeze an interview out of Jacob Seligmann, a sharp, perky composer:

Q: Your new musical, The Big Bank, is bittersweet. What do you hope people will get out of it? 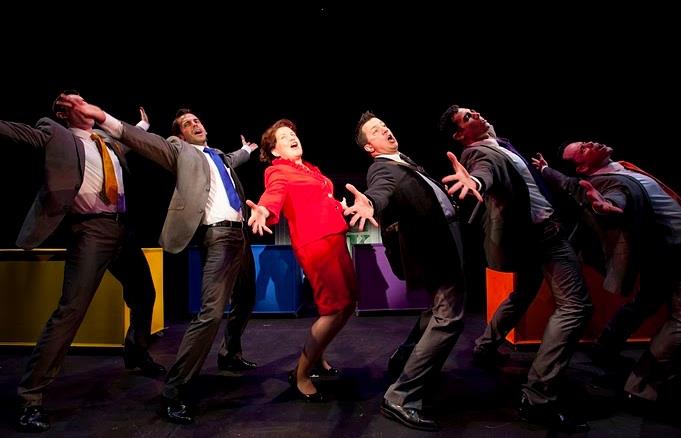 A:  One of the wonderful things about The Big Bank is that on the surface, it helps people forget about their problems because it’s very funny and entertaining – the music and the lyrics are witty and intelligent; it takes you on a journey, so you do get your spin. And still, the best kind of art is the art that helps you not only to escape from the reality but also leaves you with another level of understanding of it. So, as people go home, I imagine they had a great time at the theater and that they might realize there was a message there which goes well beyond just being entertaining. There’s very real, important work to do on ourselves, because the way we have been going has brought us to destruction, and it is very serious.

Q:  In what way does ‘The Big Bank’ echo the Occupy Wall Street voices and in what way it doesn’t?

A:  On Wall Street, there is a lot of concern for social justice and at the same time just as much screaming about how bad the banks are… I identify with both. The Big Bank seems as an anti – bank musical, but the bank is really just a symbol. Everybody wants to think of the bank as this extruder, the evil, with all the money and all the power. But the truth is the bank is inside every one of us, and to make a change, a person has to look at the man in the mirror. Take a look at yourself and make a change.

Q: What was your inspiration for this musical, considering it was written 16 years ago?

A: In 1989, when I was a freshman in high school and Dan was a senior, we were cast as the leading male roles in our high school musical. Our fiery music director, in whose memory “The Big Bank” is dedicated, took a chance by casting two brothers in the leading roles. It was clearly the moment when our musical theater relationship began. In summer of 1994. Dan and I were college students. One night, Dan and I were sitting on the couch at our parents’ house in Westchester, watching TV. We caught Charlie Rose interviewing Andrew Lloyd Weber and Tim Rice about their musical theater collaborations. Suddenly, Dan turned to me and said, “We could do that.”  I said “Yeah…?” And we did.

Q: What do you think made it relevant today? 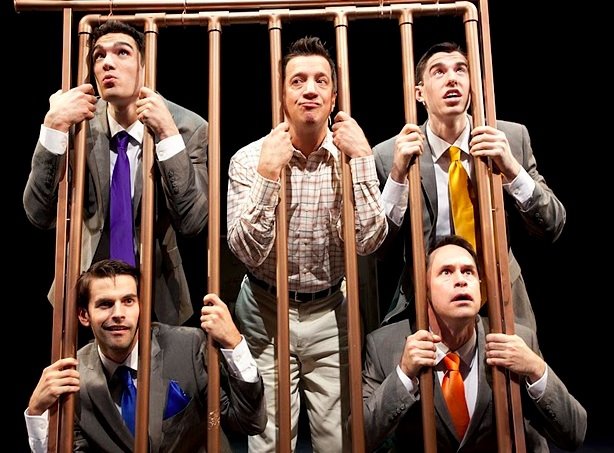 A: When we started creating The Big Bank, it took over our lives — we worked on the book and the music and lyrics every day for a year. We put all our money into it, going into great debt. We put all our brotherly love and hate into it and fought over every word and every note. The following summer we recorded the demo of the musical and then we sent it out, sure that it was going to be a huge Broadway hit. But the world wasn’t ready for “The Big Bank” quite yet. It would take a real financial crisis and a foreclosure frenzy before a musical about a bank that loves to foreclose on people would become relevant. Back then, we couldn’t have known the magnitude of the financial crisis that was going to hit this country, but we did feel the greed driving financial industries would start causing huge problems sooner or later.

Q: What is the role of entertainment in changing the values of society? 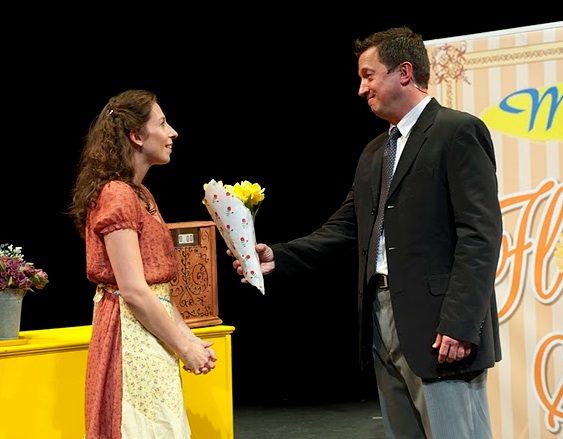 A: It’s all about the self; so we can complain all we want about the banks, but I think we need to complain about ourselves: everybody wants to repossess each other’s stuff, to take each other’s things. On one hand, we want valuables bigger and better. On the other, we also have a place inside that wants to escape that mentality into love. I hope that The Big Bank will help people understand that we are all, actually, the same; we all have a desire to receive power, fortune, fame, knowledge, and it led to a lot of problems…

Q: I heard you met Michael Moore at Liberty Plaza, what was his response to the Big Bank?

A: Indeed! I chased him with my accordion and he sang “the big bank!” (chuckles)

Q: Where can people go to see it these days? 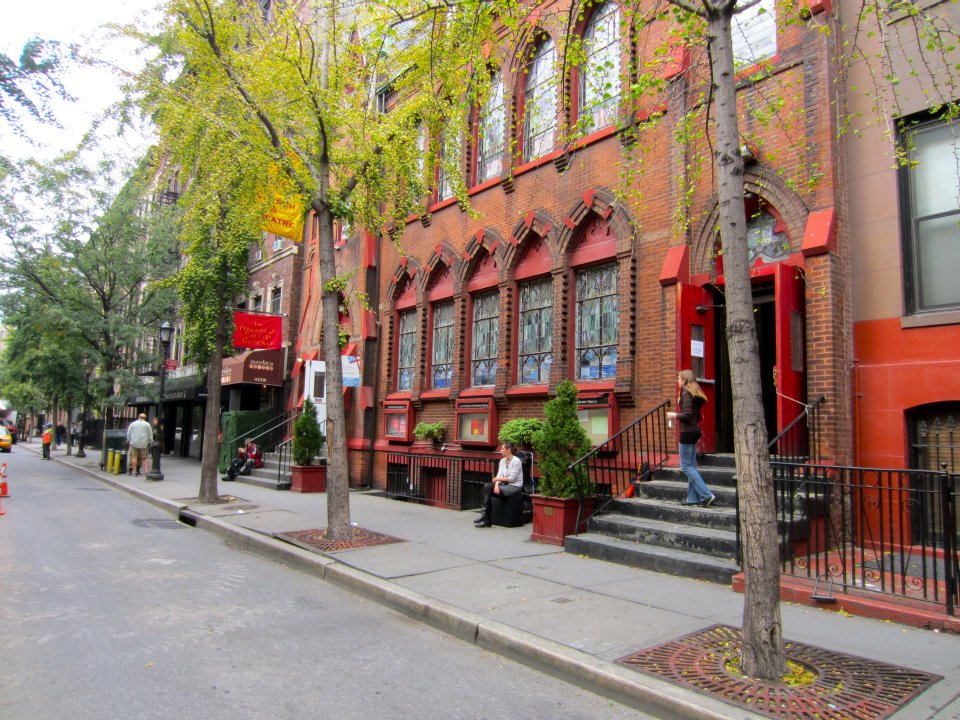 A: Unfortunately, the show at Clements Theater closed in October, although we are very hopeful to see it re-open on Broadway soon. But we have trouble getting produced because we are biting the hand that we need to feed us. This is a fact. It’s rough. So for now, I could only send you some links, where you can see the best scenes from The Big Bank musical and post your opinion. We also have a Facebook page if you’d like to follow up. http://www.facebook.com/#!/thebigbankmusical

Q: What’s next for the Seligmann brothers? 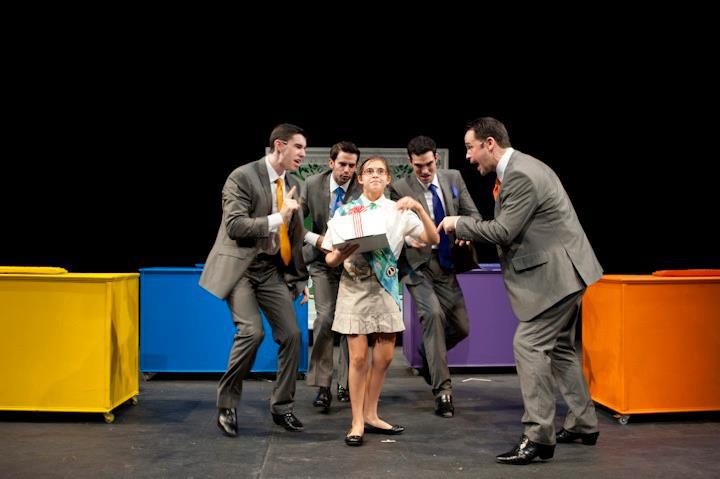 A: I’ve already got my next musical written pretty much. My brother is on board to help shape it up… As my director said, “A musical is never written; it’s re-written”… So, I think our next musical will probably be an autobiographical, a spiritual journey of an individual, who gets married at a young age, has two kids, goes through intense transformation, divorce, and a lifelong dream being fulfilled as his musical makes it to Broadway, which is, basically, my life story.  But I think I got enough interesting, somewhat fantastical, and even witty, real, scary elements to my life, so there will be some interesting stories to tell. That’s what I’m hoping to do next, but of course The Big Bank will take a bit more effort and time to bring it to the next level. We’re shooting for Broadway; that’s the next phase, and then I’ll start working on the new musical and spend more time with my kids and friends, whom I really owe to…

Finally, I asked Jacob what motivated him to write and produce such a show, Jacob smiled, and, with a mischievous twinkle in his eye, sang a Michael Jackson song:

I’m starting with the man in the mirror,
I’m asking him to change his ways,
And no message could have been any clearer,
If you wanna make the world a better place.