Ego – From Birth to Adulthood 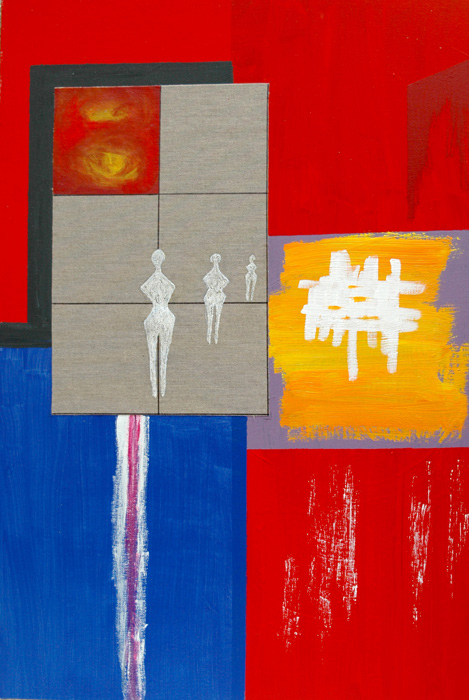 We are an old species!  Nobody knows where we came from, but we certainly have a long history – by our standards at least.  Scientists tell us we started as goo, while creationists insist we were sculpted from clay by the divine hand.  But regardless of how we began, it was from one seed, one lump of clay, or one puddle of goo. And if dust is what we all are returning to, then there is going to be one cloud of it flying around the earth. No matter the matter, this is what we are all about – oneness.

Either way, once we took human form, we became mankind and embarked on exploring the allotted dimension.  We floated on Tatum’s[1]back through infinite celestial waters, dwelled on a vast, lavish island carried by three giant elephants[2], and roamed virgin flatlands resting on three cosmic whales[3]sleepless in their sacred duty.  All these empyrean colossi were doing an excellent job until we found ourselves on the round globe, where point A has the same address as point Z.  The primordial beasts were laid off and their phantoms discarded.  We finally reached point Z, and a millennia long, blindfolded journey came to an end.

The bandeau concealing reality was removed, and we entered a round world, which turned out to be surprisingly small – in fact, perhaps even smaller than our previously occupied, flat habitats.  At least in those bygone days, we could still dream about some distant terra incognita[4], filled with imaginary wonders and captivating riches, where we would be able to move one day, in case we got tired of our neighbors, relatives, government, or the grass.  Although the latter was getting greener behind another’s fence, border, and “NO TRESPASSING” sign even then, it still didn’t vex us too much, since space and novelties were plenty, and all we had to do was seek, find, and claim a portion of it, in order to fulfill a lifelong desire and make one sweet dream come true.

Moreover, once we had a chance to look about and tally ourselves, we couldn’t but feel proud of being admirably obedient to the order to multiply.  After we had failed “Project Babylon”[5]and flipped on our collective faces, we got conveniently separated by languages and self-imposed borders, to demonstrate our newly discovered and well-defined differences, all of which we found great pleasure in, since our bursting, evolving desires demanded what we didn’t quite feel before – hate.  We developed in color, character, behavior, and mentality and spread around the globe, to take a designated spot under the sun, as far as possible from our neighbors – so that we didn’t have to see their ugly faces and covet their still greener grass.

Since then, desires have swelled; the brain has blown up to service them; languages have bred countless offspring to distance us even farther. Now, the differences are monumentalized and the borders – legalized, to confirm once and for all: we own a piece of the world, and nobody else is entitled to its possession, because we spotted it first.  What a peculiar species we are indeed!  Just because we want something, we immediately think we are entitled to it, and would do whatever it takes to get what we want.  And so we have.

But while we were claiming our domains, we were still undergoing the common stages of human development: infancy, toddlerhood, childhood, and adolescence.  We bit and broke teeth; we grabbed and got punched; we touched and got burnt; we played and got tricked; we fought and got knocked out. As we grew, we felt weary and bored, so we switched gears and turned on the creative mode.  We built art museums, conservatories, philosophy schools, and science academies.  And that was quite fun, until we lost interest in it as well and went back to flexing muscles, but always better equipped.  After all, there is no stress, longing, or melancholy that a war party can’t fix…

Since ego’s evil eye never sleeps and conscience does, we got convinced that all our problems are due to the flaws of “the others” and if we got rid of them, life would be perfect.  But since we never really could live without one another, we had to hold each other’s attention by any means possible, whether it would be love or hate; and so, teasing each other mercilessly, we entered adulthood.

By then, we had had some basic traditional education and studied ourselves in the books written by us, swanky little sapience.  We thought we learnt all there is to know about what everybody needs, and in order to prove that we are the most skilled at harmonizing dysfunctional ties, we decided to demonstrate our care and irrefutable magnificence, by making everyone happy – with or without their consent.

And boy, did we demonstrate!  We would try anything to earn one another’s respect, recognition and admiration.  We’d bring not a few but a horse-load[6]of gifts!  (Why do we squirm at hearing the word “Trojan”? As if we had other alternatives but to shove those trinkets down their ungrateful throat.)  We never gave up and kept thinking of more valuables to offer: culture, freedom, democracy – let us refine your tastes, liberate you from ignorance, and teach you how to govern your arrogant selves!  But the blessed barbarians wouldn’t accept our charity.  What were we left to do if not make them?  We couldn’t waste a perfectly good intention.  But they wouldn’t understand…

When all our courtesies and advances failed, we decided to impress them full force and go as far as to share with them our God – a priceless and heart-guarded treasure. We were certain that this gift couldn’t be ignored and from then on we would be eternally loved. We dressed ourselves up and joyfully landed in our neighbors’ harbors. How shocked were we when we learned they already did have a God and claim they had a better idea how to please Him!  That would tick anybody off.  How dare they?  Of course we had to punish the brutes!  Poor little sapience: how love-sick and immature we are in our courtship.  We come in peace and go in pieces…

And so we’ve kept playing this game, breaking each other’s hearts and noses, making up afterwards, and starting it all over again once we couldn’t reconcile those good intentions we had for each other from time to time.  While we were at it, Mother Nature patiently watched us, in amusement and with deep sympathy for her evolving humanoids.  When we got especially naughty, she would give a gentle shake, splash with a bit of cold water, or puff some hot air on us, just to remind us to play fair and be nice to each other as siblings we are.  She knew we were just growing up and the time would come when we would mature and take responsibility for each other and…her.  It’s about time we did as she expects, but we are trying our best to avoid just that.  And Nature, who is no longer amused by our repetitive and infantile behavior, has begun to contract our “personal” space, forcing us to come out of blood drunken stupor and acknowledge our primordial genetic connection, which roots in oneness.

So, here we are, all 7, 000, 000, 000 of us, tied by gravity to a three dimensional firmament that we would gladly jump off of if there were a greener lawn nearby; but there is none.  We want a divorce, but we cannot move out.  We look at each other with spite and suspicion while we yearn to leap forth and unite in a longed-for embrace.  It seems to be as easy as it is impossible; the gear is heavy, artillery is on the line…and we were told we look stupid with roses. 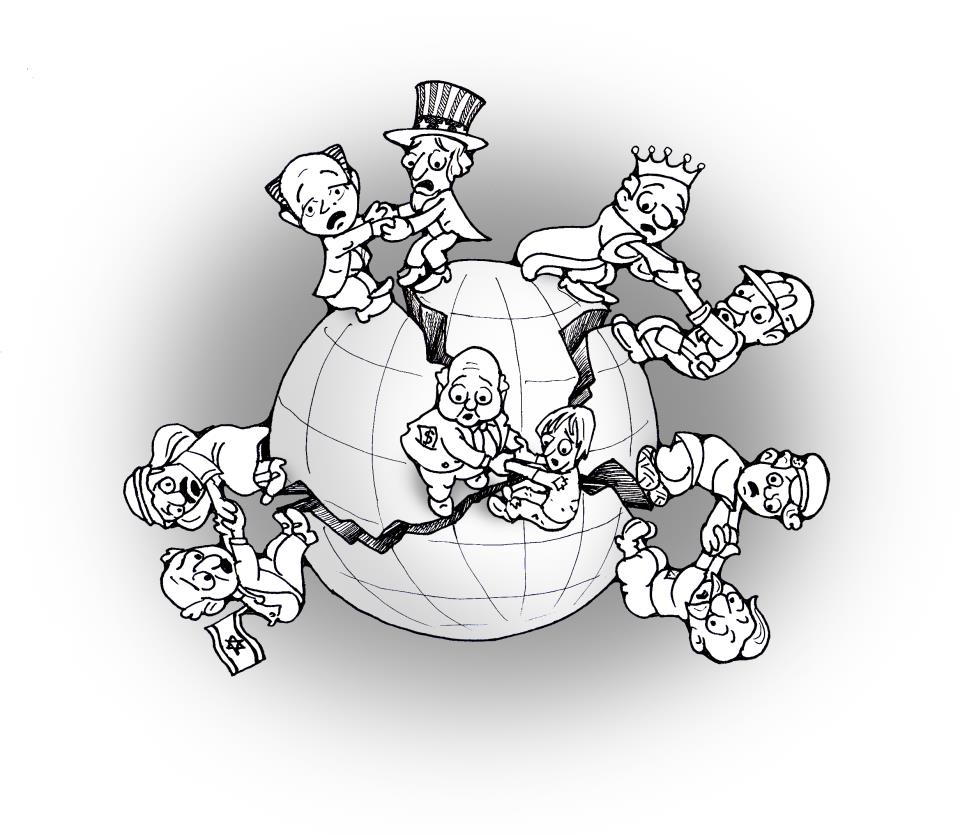 Now, we are standing on the brink of being squeezed out of our three dimensional spherical crib onto a new grid of existence designated for conscientious, accomplished adults.  Our relationship has to mature, which means that all our narcissistic, compulsive obsessive, histrionic, anti-social, and paranoid behaviors have to go. Mother Nature doesn’t intend to beg that we honor the Cosmic Family Law – she demands it, and resistance is futile.

Therefore, if we are as sapient as we claim to be, we must show the ability to read between Nature’s lines and heed the unyielding wisdom of the eternal sage.  We are being graduated to a higher degree of consciousness, where “sapience” is more than a book-learned intelligence and a millennia-long competition of wills.  We must take off the gear and put down the arms, for we are entering the era of the meeting hands – the age of amalga-nation!

[1] World Turtle supporting the flat earth – a metaphor representing a popular notion of a primitive cosmological myth.
[2] Mythical animals supporting the earth in Hindu cosmology.
[3] Cosmic sea mammals carrying the flat earth in Russian mythology.
[4] Latin for “the unknown land”
[5] A humorous reference to the biblical account of a united humanity speaking a single language and invincible due thereof, but who were confounded in their speech and scattered upon the face of the earth by God, as a reprimand for their arrogant attempt to build a tower to Heaven to demonstrate superiority of their collective ego.
[6] According the Greek legend, the Greeks conquered Troy by tricking the Trojans with their gift – a wooden horse they build, manned, and left outside the city. Hence saying -“Beware of Greeks bearing gifts.”