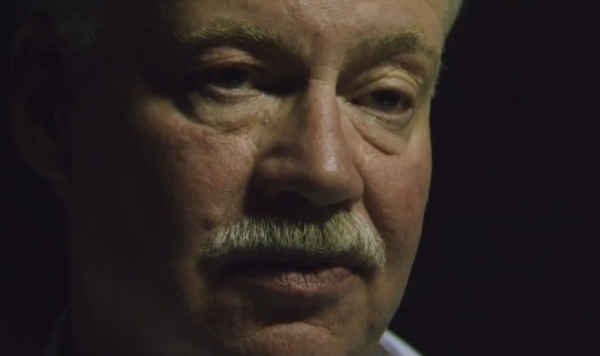 I’m talking about a revolution that’s probably the hardest kind, the kind that takes place in the human soul, in the human mind. To be able to tear everything down, throw everything out, and start with a completely fresh paper and say… ‘okay, how do we solve this problem?’”

Collapse depicts the present and future forecast of the world’s problems through the lens of Michael C. Ruppert, investigative journalist and author of Confronting Collapse: The Crisis of Energy and Money in a Post Peak Oil World, who discusses the myriad crises humanity faces and how they are forcing humanity into a new era.

What Will You Do When Oil Runs Out?

Starting with peak oil, Ruppert clarifies how oil is literally everywhere in a person’s life…

All plastic is oil. Most paints, all pesticides are made from oil. Everything from toothpaste, to toothbrushes, is made from oil. There are seven gallons of oil in every tire. There is nothing anywhere, in any combination, which will replace the edifice built by fossil fuels. Nothing. Peak oil is probably now very easy to explain. Much easier than it was a long time ago. People have felt what $147 a barrel of oil feels like.”

…and how the running out of oil in the world will force humanity to make very big changes:

The end of oil is like end of the way of life. We’re hitting a new era.”

What Will You Do When Money Runs Out?

Ruppert continues by painting a bleak fade-to-black picture of the world as it heads into the future, stating the complications or even impossibility of replacing oil with the alternative energies usually proposed – ethanol, electricity, coal, nuclear, tidal and solar power – and explaining how food and monetary systems throughout the 20th century were setup in a way that would lead to a collapse of humanity’s systems, and which is being felt globally today.

By 2006, I knew that the collapse was very imminent, that there would be a major implosion of the US economy. … And now, collapse is happening, these pieces are falling exactly as everything else had written, said, done. All the peak oil activists, all the sustainability advocates. Our map was proving deadly accurate. Things don’t break up, they break down.

When a government collapses, what happens? The mail stops getting delivered. Air traffic controllers don’t get paid, so they don’t go to work, which means planes don’t fly. Bridges and highway inspections don’t get made. Food and drug administration inspections don’t get made. Maintenance is going to be defrayed. Law enforcement stops working. I mean, it’s no secret now. You see the headlines every day. California’s bankrupt, Michigan’s bankrupt, Ohio… They’re shutting down services left and right. There are tent cities springing up all over the country, there are homeless, displaced people. The great many billionaires, who we would call the elites, the many very, very wealthy people are getting crashed, burned and eaten alive.

What you don’t hear is the fact that all over the world economies are collapsing much faster than the US economy. Britain is an absolute basket case. There is a curtain of despair descending across Eastern Europe. There’s a revolution underway in Greece: it’s not riots, it’s not civil unrest… it’s a revolution. Drug violence right across the border in Mexico. This is all part of the collapse. Pakistan, Afghanistan, there’s lots of violence. The people who have run the planet to this point and who are running the planet now are losing control.”

Will You Be Concerned About Humanity’s Basic Survival? Will You Try To Find Balance Among People & Nature? Will You Change The Way You Think?

Ruppert continues by discussing a paradigm shift for humanity, involving:

The human race now is only going to be concerned, not with an ideology, but what allows them to survive. Capitalism, socialism and communism are all terms that need to be tossed in the trash can immediately, because all of them were created on the assumption of infinite resources. Not one of those ideologies – which are now dead dinosaurs, archaic fossils – is relevant to our way of life. Not one of them recognizes that there must be a balance between growth, the resources, and the planet.

Forget the idea that you can have as much as you want, because until mankind surrenders to the fact that it lives on a finite planet, and it must have balance with that planet, with the planet’s resources, with the animal life and all the other life, there can be no happiness for anything. Anything. It’s all about getting balance back.”

Maybe You Will If Everybody Does…

After confronting the viewer with a situation that seems impossible to solve, Ruppert’s final words in Collapse shed a thin beam of optimistic light, hinting that when 10% of the human population realize a change of thinking, then that thinking will spread to the entire human population.

There is a legend, or a fable about the 100th monkey. A long time ago, in the late ’40s, early ’50s, when atom bombs and H-bombs were invoked with above ground testing, we set off an atom bomb on an atol in the Pacific. And then we waited a number of years, because we wanted to answer questions like how soon after we nuked something, would it be possible to get any kind of life started again? So they went back to this island and they decided to repopulate it with monkeys. And the monkeys ate coconuts. Everything was pretty healthy, except for the fact that the husks of the coconut were slightly radioactive. So the scientists took 10 monkeys or so, and taught them to wash the coconuts in the fresh water stream on the island before they cracked them open, and turned the whole thing loose to see what would happen. Well, you know, pretty soon maybe 12 monkeys out of a population of 10,000 were washing their coconuts. And then 20, and then 47. But a funny thing happened. As soon as the 100th monkey started washing his coconut husk, all 10,000 started washing simultaneously. I guess one way that I have always looked at my life, especially since I clearly understood what this issue was in late 2001, is – this is my quest for the 100th monkey.”