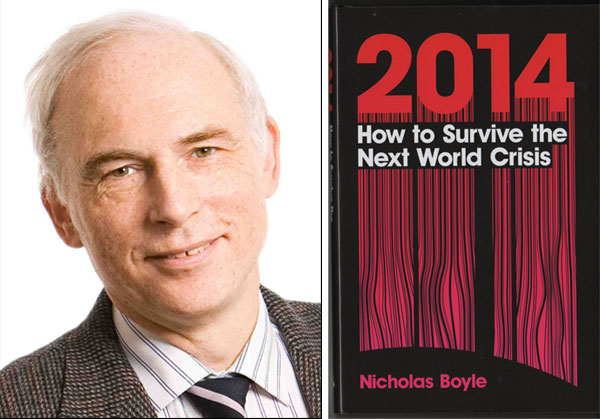 Nicholas Boyle, a Professor of German history at Cambridge University, claims in his book, 2014: How to Survive the Next World Crisis, that his study of human history has led him to conclude that major defining events, for previous centuries, have occurred within the second decade of those centuries; and that these great events were to define the course those centuries took.

For instance, in 1914 World War I began and this, Boyle claims, set the course for

…international discord throughout the 20th century.”

If a century is going to have a character it is going to become apparent by the time it is approaching 20 years old, the same is true of human beings.”

Here is Boyle speaking on 2014: How to Survive the Next World Crisis [6 min.]

Boyle sees the global financial crisis as being the trigger for this next “Great Event” and the United States as the pullers of it; stating,

The U.S. will become the key player in a series of make-or-break decisions and either condemn us to a century of violence and poverty, or usher in a new age of global cooperation.”

He sees the U.S. as having this position due to the combination of their economic influence diminishing and their military power being unparalleled.

The answer? Boyle suggests that nations must today realize that the previous reign of nation states has ended and that global governance must now take its place.

It is a profoundly hopeful sign that we begin the 21st century with very many more international and intergovernmental organizations than we had at the start of the 20th,” he says, and getting back to America, “The only conceivably peaceful route to that goal is through a continuation of the pax Americana.

All quotes taken from the Daily Mail