The “Wind of Change” or a “Revolution of Hormones”?

Occupy Wall Street, Occupy Boston, Occupy LA, Occupy New Jersey, occupy… Where did it come from, this notion that for so many became the wind of change? It lifted the hopes and desires of thousands of people and blew them toward Liberty Plaza that for three months became home to a new society – the Wall Street society. Whatever it was that triggered this movement, it was fast and powerful, and grew to be a unique, historic phenomenon that America had hardly seen before. It was as if some invisible force was tugging at people’s hearts, pulling them into the whirlpool of the events instilled by their aspirations for social justice, security, and ultimate freedom, the freedom to simply be. What was this force and is it still present?

Occupy Wall Street (OWS) is a protest movement which began on September 17, 2011 in Zuccotti Park (located in New York City’s Wall Street financial district), it was initiated by the Canadian activist group Adbusters. The protests were against social and economic inequality, high unemployment, greed, corruption, and the undue influence of corporations—particularly from the financial services sector—on government. The protesters’ slogan We are the 99% refers to the growing income and wealth inequality in the U.S. between the wealthiest 1% and the rest of the population. The protests in New York City have sparked similar protests around the world. (Wikipedia, The Free Encyclopedia, “Occupy Wall Street”)

The movement was inspired by the Egyptian Tahrir Square uprising and the Spanish acampadas. The protesters vowed not only to end the “monied corruption” of the country but to also stand for social justice all around the globe: “We will grow stronger in our solidarity and we will be heard, not just in New York, but in echoes across the world.” (NYCGA)
It took approximately two months for the protests to spread across the country, with new “campsites” popping up in state capitals and in smaller cities and towns, in solidarity with Occupy Wall Street. According to Internet resources, in a few short weeks, OWS engaged in more than 900 meet-ups in 900 cities across the country. It even went international with Occupy sites in Australia, London and other prominent cities. 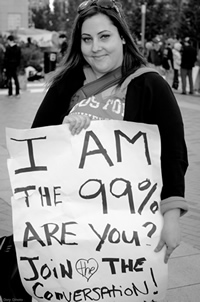 The movement that began as a small band of protesters in Zuccotti Park, gained endorsements from major unions and progressive leaders as well as some influential politicians. The Wall Street movement prompted comments from President Barack Obama and drew political remarks from overseas. An Iranian leader said this surge of protests in the US was a reflection of a serious problem that he predicted would ultimately topple capitalism in America. Ayatollah Ali Khamenei claimed the United States is in a full-blown crisis because its “corrupt foundation has been exposed to the American people.”

During its first three weeks, OWS was ignored by mainstream media, while independent television and radio stations kept flooding the place, running interviews with the Liberty Plaza dwellers: the organizers, protesters, onlookers, tourists, professors, students, police, the homeless and even the “grass” smokers who moved into the western side of the park. Occasional clashes, arrests and violence did occur, but for the most part, everybody was behaving reasonably well and people were watching each other with curiosity and mutual expectations.

The OWS organizers avoided structured leadership in order not to get “hijacked” by government agents and opportunists serving their own private agendas. While many Americans insisted that the protesters needed to make a list of demands, outline their principles  and establish a well defined power structure, the Onion Press, a spoof news network, insisted in their own, somewhat sarcastic perspective, to showcase Americans’ inability to cope with life:

“The protesters need to unify around a shared agenda with precise policy goals so I can begin paying no attention to them whatsoever,” said Tulsa, OK poll respondent Kaye Petrachonis, echoing the thoughts of millions across the country. If they don’t have a clear power structure organized around specific demands first, then I’ll never be able to completely tune them out due to a political conflict of interest or an inability to comprehend complex, detailed economic concepts. These people really need to get their act together.” Once Occupy Wall Street has a concrete set of objectives in place, the majority of Americans said they would go back to waiting for the sluggish economy to recover while blindly accepting things the way they are.”

Since OWS started, it has been viewed as a serious and un-nerving event by some and a joke by others, a kind of Halloween party or “hormonal revolution”. But most of the Zuccotti Park visitors seemed to be genuinely concerned if the movement was going to live or die, and their sympathy leaned towards the occupants. There was a pronounced fear of losing the human connection that Liberty Plaza was so heavily saturated with. Such was the gravity of it that hundreds and sometimes thousands of them returned there daily – to get that additional dose of camaraderie, with its rejuvenating energy that was coming from natural reciprocity, bountiful handshakes and smiles. Walking around casually chatting with strangers who suddenly felt like family, dropping in on a group conversation, dancing to the lively beat of Brazilian drums, eating food fresh from the field kitchen, working as a “human mic”– all of this became part of the Wall Street society’s daily routine, and people were drawn to it like moths to the flame, regardless of their impression of it.

What stood out is that despite its seemingly chaotic nature, the WS society was living, working, and breathing in unison.  At first, it looked like a “rebellion of hormones”, but the longer it lasted, the harder it became to dismiss the presence of an emerging new entity, which drew people in, closer and closer, until they’d begin to feel inseparable from this diverse, strange, and colorful organism, where everyone was a vital and crucial part.

As Joseph Stiglitz said, “The economic crisis presents us with a unique opportunity to invest in change.”
If we analyze crises taking place in each country today, it is easy to see that at the root of them lies social, economical, and political injustice, caused by greed.  It is hardly news. These vices have been plaguing human history for thousands of years. So why is there such unrest now, why is it global, and why is everyone protesting simultaneously? 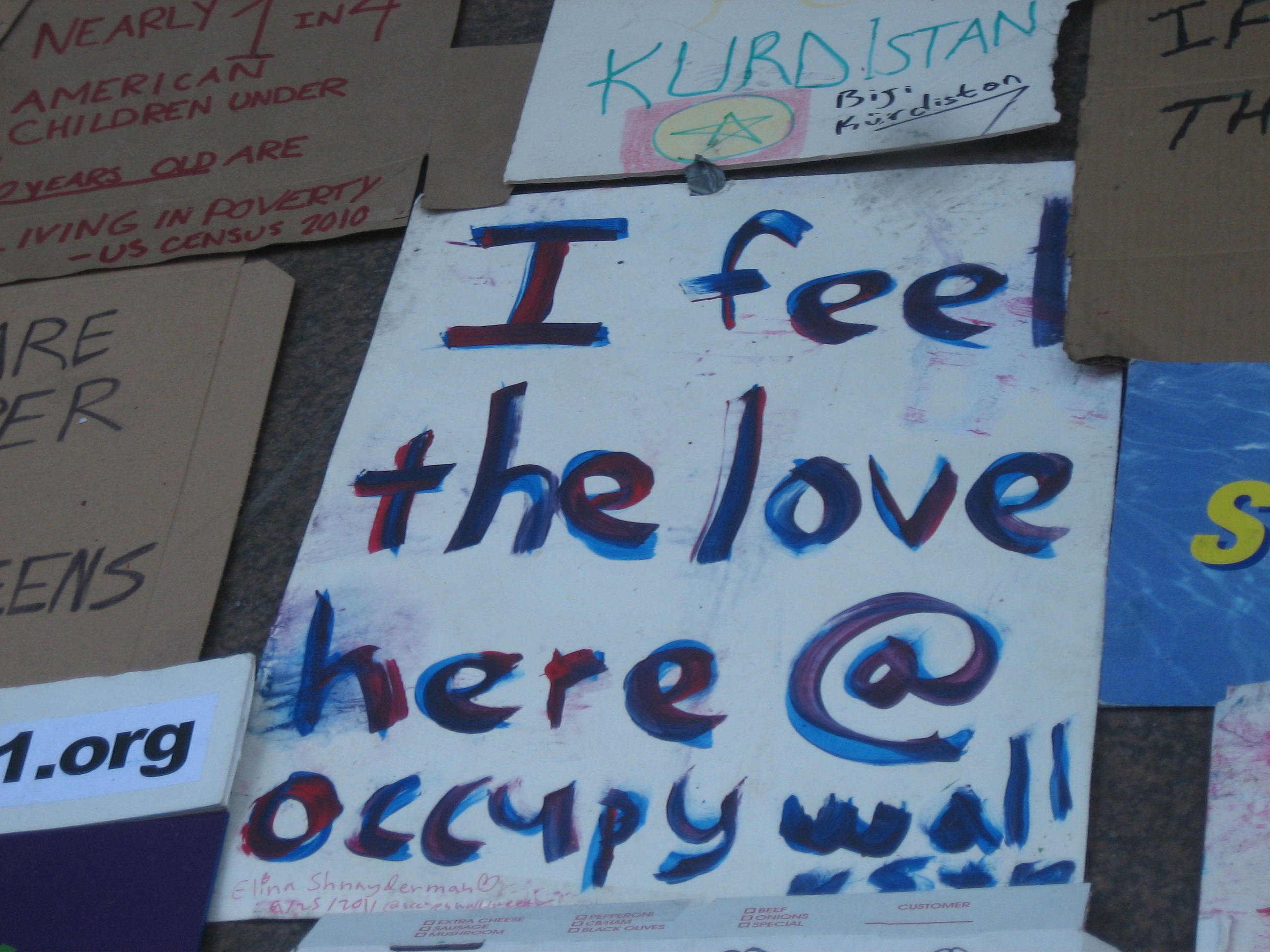 The answers can be found in the structure and evolution of human nature, claims Jean M. Twenge and W. Keith Campbell in The Narcissism Epidemic: Living in the Age of Entitlement (Free Press, 2009). They say that as narcissists, we put ourselves in the center, and “grade” everyone else according to the benefit they may bring to us. This is how we connect to the world, through the spectacles of self-entitlement. However, this is precisely how we must not function if we are to succeed in an era of globalization, when the world is interconnected and interdependent. According to Jean M. Twenge and W. Keith Campbell, in order to succeed, we must want to benefit those to whom we are connected to just as much as we wish to benefit ourselves.

So it follows that as one people, we must face the facts: the future of the human race requires the cooperation of all its members. Reality dictates that we declare our interdependence. In a nutshell, “The pursuit of happiness is not a solitary goal. We are connected, and so is our joy.” (James H. Fowler, Political and Social Scientist)