We Are All Connected, a song made up of sampling scientists’ quotes on the interconnectedness of the person, humanity, nature and the universe, is part of the Symphony of Science musical project of John D Boswell, a project that aims to raise awareness of scientific and philosophical knowledge in musical form.

Watch ‘We Are All Connected’

Lyrics Of ‘We Are All Connected’

[Neil deGrasse Tyson]
We are all connected;
To each other, biologically
To the earth, chemically
To the rest of the universe atomically

[Carl Sagan]
We live in an in-between universe
Where things change all right
But according to patterns, rules,
Or as we call them, laws of nature

[Neil deGrasse Tyson]
I know that the molecules in my body are traceable
To phenomena in the cosmos
That makes me want to grab people in the street
And say, have you heard this??

The Neil deGrasse Tyson ‘We Are All Connected’ Quote In Full 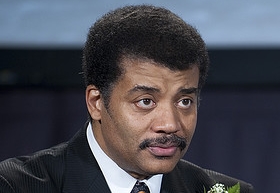 Recognize that the very molecules that make up your body, the atoms that construct the molecules, are traceable to the crucibles that were once the centers of high mass stars that exploded their chemically rich guts into the galaxy, enriching pristine gas clouds with the chemistry of life. So that we are all connected to each other biologically, to the earth chemically and to the rest of the universe atomically. That’s kinda cool! That makes me smile and I actually feel quite large at the end of that. It’s not that we are better than the universe, we are part of the universe. We are in the universe and the universe is in us.”

Image at top: A More Glorious Dawn by garlandcannon ©