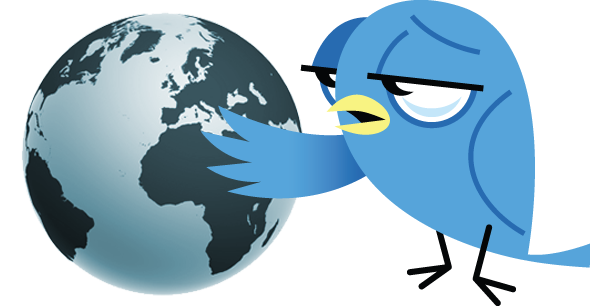 In case you didn’t know, or have yet to receive a tweet about it, twitter is now being used for research. For instance at Cornell University a study was conducted which looked through over 500 million tweets to gauge users moods throughout the day: It turns out that we start our days positively (positive tweets), then our moods begin to decline throughout the day (at around midnight they pick back up again).

A more recent study at the University of Vermont has also been conducted in which, “… more then 46 billion words written in Twitter tweets by 63 million Twitters users around the globe…” were analyzed.

From this the researchers immersed themselves in a new perspective,

The Vermont team then took these scores and applied them to the huge pool of words they collected from Twitter. Because these tweets each have a date and time, and, sometimes, other demographic information—like location—they show changing patterns of word use that provides insights in the way groups of people are feeling.”

The implications of such research?

The new approach lets the researchers measure happiness at different scales of time and geography… and stretched out over the last three years, these patterns of word use show a drop in average happiness.” 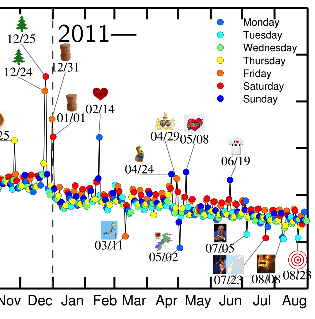 So, the Cornell study measured mood shifts of Twitter users throughout the day and now the Vermont study shows that happiness has been declining amongst Twitter users over the past 3 years.

The researchers stress that it isn’t only “… younger people… with smartphones,” either because, “Twitter is nearly universal now… Every demographic is represented.”

“… measuring happiness has been exceedingly difficult by traditional means, like self reporting in social science surveys. Some of the problems with this approach are that people often don’t tell the truth in surveys and the sample sizes are small.”

The Vermont study does not show a specific reason for why happiness is globally declining but does pose the question,

Why does happiness seem to be declining?”

Quotes and graph image taken from the University of Vermont. For more information about the study: http://www.uvm.edu/~uvmpr/?Page=news&storyID=12986&category=uvmhome

For more information on the Cornell Study:
http://www.sciencemag.org/content/333/6051/1878.abstract