Your Social Network Has The Power To Influence What You Think, Want, Feel, Choose And Eventually Do 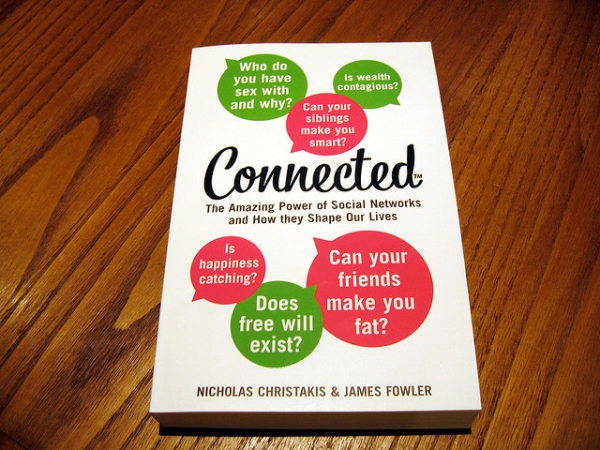 “How we feel, what we know, whom we marry, whether we fall ill, how much money we make, and whether we vote all depend on the ties that bind us. Social networks spread happiness, generosity, and love. They are always there, exerting both subtle and dramatic influence over our choices, actions, thoughts, feelings, even our desires. And our connections do not end with the people we know. Beyond our own social horizons, friends of friends of friends can start chain reactions that eventually reach us, like waves from distant lands that wash up on our shores.”

Nicholas A. Christakis, a social scientist at Harvard University and James H. Fowler, a political scientist at University of California present in their book Connected: The Surprising Power of Our Social Networks and How They Shape Our Lives how people are interconnected, interdependent, and products of their societies.

Their book shows many examples of how the social networks people are in profoundly impact all areas of life: health, marriage, economy, politics and more. This post contains a few examples:

Examples Of Social Networks In Health

Have you ever wondered how your social environment can affect your health?

Back Pain – A Culture-Bound Syndrome

“The rate of lower back pain among working-age people is 10 percent in the United States, 36 percent in the United Kingdom, 62 percent in Germany, 45 percent in Denmark, and 22 percent in Hong Kong. In some ways, this varying prevalence, and the culturally specific ways in which back pain is experienced, suggest that back pain can be seen as a culture-bound syndrome – a disease recognized in one society but not others, such that people can experience the disease only if they inhabit a particular social milieu.”

“Eating disorders resemble other culture-bound syndromes in that they can ripple through a social network in waves, reflecting the possibility of person-to-person transmission of (admittedly severe) weight-loss behavior. High-school girls may compete with one another to lose weight and college dormmates can copy one another’s binge eating. In fact, these behaviors may affect a person’s network location, and in one study of sororities, women who were binge eaters actually became more popular and moved to the center of the social network, just as nonsmokers did in our study.”

Example Of Social Networks In The Economy

Economists Morgan Kelly and Cormac O’Grada studied two panics that were in the 1850s at a New York Bank (Emigrant Industrial Savings Bank), in which they observed how people’s interdependence affects their actions.

“Kelly and O’Grada found that social networks were the single most important factor in explaining the closure of accounts during both panics, even more so than the size of the accounts or the length of time they had been opened. Thus, financial panics may result from the spread of emotions or information from person to person.”

Example Of Social Networks In Politics

How did Obama succeed in his election campaign? He made people feel connected.

“Obama’s campaign was described as a perfectly run operation that made few, if any, mistakes. But how did he get people on board before the public perception that things were going well? How did he persuade so many previously uninvolved people to donate money to him and to vote for him, especially those who in the past believed their vote did not count? In no small measure, Obama succeeded because these ‘working men and women’ felt connected. Obama’s campaign was a historical milestone in all kinds of ways, but the most revolutionary may not have been its fund-raising. Many have commented on Obama’s remarkable ability to connect with voters, but even more impressive was his ability to connect voters to each other.”

The book Connected: The Surprising Power of Our Social Networks and How They Shape Our Lives is full of many more examples on how people are interconnected and thus are strongly influenced by the social network they are in.

Image: Connected: Amazing Power of Social Networks and How They Shape Our Lives by zone41.