Alan Watts – A Conversation With Myself [Video]

Alan Watts muses on the difference between the world of nature and the world of man. The following are some quotes from the video: 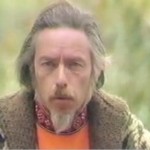