Is It Time To Look Beyond Capitalism Toward A New Social Order? [RSA Video]

Is it time to look beyond capitalism towards a new social order that would allow us to live within a system that could be responsible, just and humane?”

figure out the role of crises in the whole history of capitalism and what’s specific and special about the crisis this time around” by looking at “the internal contradictions of capital accumulation.”

An Internal Contradiction Of Capital Accumulation

Financial profits in the United States were soaring after the 1990s” while “profits in manufacturing were coming down … you can see the imbalance … you’ve screwed industry to keep financiers happy,” and as a result “the wealth of the rich … has accelerated.”

How Did This Happen?

Capitalism Never Solves Its Crises Problems, It Moves Them Around Geographically

Out of this comes a theory which is very, very important: that capitalism never solves its crises problems, it moves them around geographically.”

you had a finance crisis … you sort of half solved that, but … at the expense of a sovereign debt crisis!” 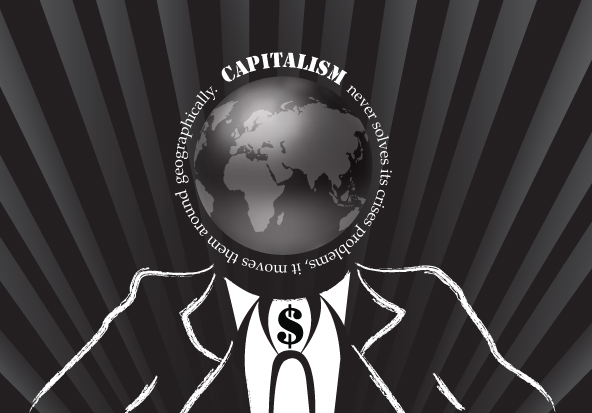