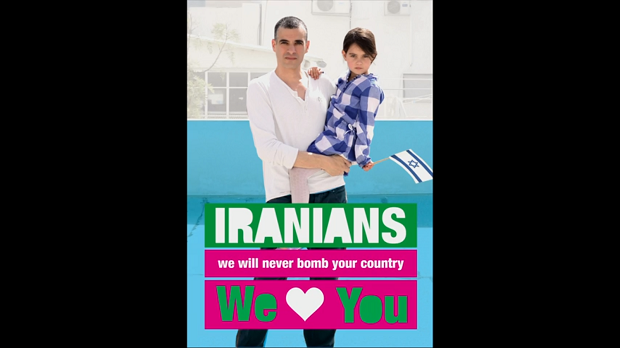 They want to respond. They want to say the same thing. So… now it’s communication. It’s a two-way story. It’s Israelis and Iranians sending the same message, one to each other.”

Given the contentious nature of relations that exist between Israel and Iran, it is a wonder that one man, Ronny Edry, could start a whole new dialogue between the peoples, simply by creating one poster on Facebook. That poster [the image above] said:

Iranians, we will never bomb your country, We [heart] You.”

The following quotes are from Edry’s TED talk. In it he details how that poster led to many more posters, conversations, and the revelation of love between Israelis, Iranians, and many others:

On March 14, this year, I posted this poster on Facebook. This is an image of me and my daughter holding the Israeli flag. I will try to explain to you about the context of why and when I posted. A few days ago, I was sitting waiting on the line at the grocery store, and the owner and one of the clients were talking to each other, and the owner was explaining to the client that we’re going to get 10,000 missiles on Israel. And the client was saying, no, it’s 10,000 a day.

(“10,000 missiles”) This is the context. This is where we are now in Israel. We have this war with Iran coming for 10 years now, and we have people, you know, afraid. It’s like every year it’s the last minute that we can do something about the war with Iran. It’s like, if we don’t act now, it’s too late forever, for 10 years now.”

So I start answering this girl, and she’s telling me she saw the poster and she asked her family to come, because they don’t have a computer, she asked her family to come to see the poster, and they’re all sitting in the living room crying. So I’m like, whoa. I ask my wife to come, and I tell her, you have to see that. People are crying, and she came, she read the text, and she started to cry. And everybody’s crying now.

So I don’t know what to do, so my first reflex, as a graphic designer, is, you know, to show everybody what I’d just seen, and people started to see them and to share them, and that’s how it started.”

So I went to my neighbors and friends and students and I just asked them, give me a picture, I will make you a poster. And that’s how it started. And that’s how, really, it’s unleashed, because suddenly people from Facebook, friends and others, just understand that they can be part of it. It’s not just one dude making one poster, it’s — we can be part of it, so they start sending me pictures and ask me, ‘Make me a poster. Post it. Tell the Iranians we from Israel love you too.’ It became, you know, at some point it was really, really intense. I mean, so many pictures, so I asked friends to come, graphic designers most of them, to make posters with me, because I didn’t have the time. It was a huge amount of pictures. So for a few days, that’s how my living room was.”

The day after, Iranians started to respond with their own posters. They have graphic designers. What? (Laughter) Crazy, crazy. So you can see they are still shy, they don’t want to show their faces, but they want to spread the message. They want to respond. They want to say the same thing. So. And now it’s communication. It’s a two-way story. It’s Israelis and Iranians sending the same message, one to each other.”