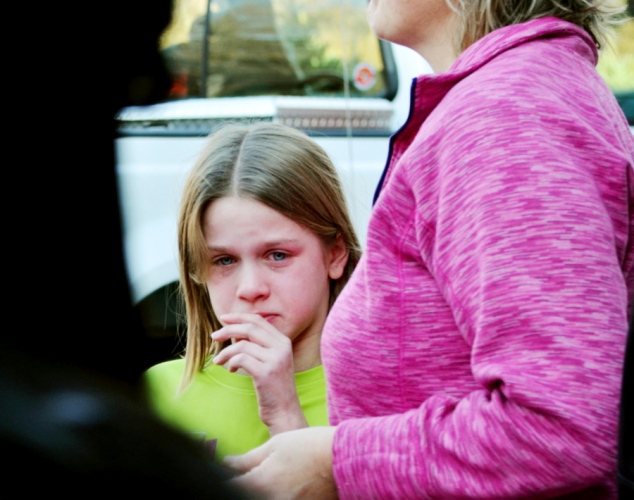 Sickening. Sickening, heart twisting news! But what is more sickening is that every channel keeps sucking ratings out of it, all the while playing commercials in between. What a culture, what an attitude, what a nation… Nobody is calling the news channel to demand recalling the ads to let the tragedy sink in, pay respect to the victims, and maybe even spend time pondering the causes of the horrendous act we just witnessed together…

The event seems grossly surreal: two weeks before Christmas, in a prosperous Connecticut town, an upscale, quiet residential neighborhood, on a street carrying a yogi’s name, the first crime unfolds, followed by even a greater one that takes lives of 28 people, 20 of whom are children attending an elementary school. A 20-year old man, after murdering his mother with the guns she kept to do sports, drives to the school where she used to work and opens fire on innocent young students, teachers and the principal, ending the massacre with a predictable act of suicide. Reporters say neighbors were “visibly upset” for they never expected such crimes happen in their town. They knew the gunman, as a “quiet kid,” who turns out to have suffered from a personality disorder. His mother though had a reputation of a “good-hearted person who was always doing something for some cause.”Authorities claim that “Americans are sick and tired of these attacks. Once again we are reminded that there is no safe harbor for our children.” (President Obama) and “Evil visited this community today.” (Gov. D. Malloy) Meanwhile, the media carry the message that schools are safe – a notion backed up by the data, they say, adding that “if the public’s confidence in schools’ safety erodes and is distorted, it can have broad, negative consequences for schools and society.”

It seems everybody is looking for rapid and comprehensive measures to prevent this kind of violence in the future. Some say there is a law about to be passed to forcefully confiscate privately owned weapons from the citizens. Others – that district leaders are advised to review their school safety plans and emergency procedures, with the goal to “remind parents and students that the school is a place to be connected, and that schools have their best interests at heart.” (R. Sprick, director of Safe and Civil Schools)

This incident is among the worst school shootings in U.S. history. Collectively, the deaths make the killings the deadliest K-12 school shooting in American history. While surfing the Net reading about and watching accounts of the tragic event, trying to find what people are saying about what really caused it, I have felt almost physical disdain for how practically every site on the web and every TV channel reports on the catastrophe between the lines of redundant merry commercials. Another one was that the nation seems to be mainly preoccupied with the confiscation of their guns. And finally, the shooter is not on the victim list. But the most crucial answer I wanted to find was to the question: Who is going to take responsibility now that the killer is dead? Not everyone will agree, but the answer is… we are. We, as society, are responsible for this entire tragedy and for all who have perished in it, including the gunman and his mother. Why? – Because:

Hence, school shootings cannot be prevented by gun control, placing security guards or, worse yet, hiring armed police to patrol the facilities where our children go to learn. We need to gather a national forum to sit down together and start to address the issue from the point of view of caring, mature, and wise caretakers, guides, parents and mentors. We must start viewing all our children and young adults as our collective, national responsibility if you will. Only then will we be able to create a safe, peaceful, and harmonious environment where violence, hate, and emotional pain will cease to exist.

If we agree to do it together, Obama’s and Malloy’s initiatives – “We’re going to have to come together and take meaningful action to prevent more tragedies like this.” (Obama) and “each parent, each sibling, each member of the family has to understand that… we’re all in this together. We’ll do whatever we can to overcome this event.” (Malloy) – can bear fruit.