Integrative Education for the Integrated World 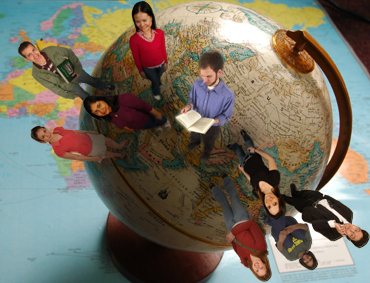 According to a year-old report, there are more than two hundred million unemployed in the world. Over the coming year, this number will grow astronomically, as global production wanes and natural resources continue to dwindle. This development constitutes an enormous problem for the unemployed themselves, as well as for society and governments, which are utterly powerless to stop it.

As the ranks of the unemployed grow worldwide, the need for a comprehensive educational course, explaining the new integrated world and its governing laws, will be indispensable in preventing the kind of bloodshed and unrest that we’re already beginning to see materialize.

So what is this “new world” that the global crisis is ushering us into? Well, if we take a step back and analyze the word “crisis,” it actually doesn’t have a negative connotation. Rather, it signifies a new stage that is similar to birth.

We know from experience that transitioning from one state to another is hard, as it entails coming out of your comfort zone. Whether it’s changing jobs or modifying any other aspect of life, we tend to resist change and prefer to stay within a familiar operating system.

With that in mind, there are two sides to this global crisis. On the one hand, we are experiencing genuinely awful and dramatic afflictions: horrendous floods, earthquakes, tsunamis, volcano eruptions, riots and wars, revolutionary coups, bloodshed in the streets, and increasingly dimming prospects of a bright future. On the other hand, we may view our current predicament as the normal pains of a process we don’t yet acknowledge, one in which we transition from one state to another.

These pains can be likened to a baby going through the process of birth. Picture a child peacefully growing inside the mother’s womb—a safe and protected place. Delivery, however, is triggered by a rather “unpleasant” process: the mother feels immense tension and experiences contractions, while the child also feels tremendous pressure but doesn’t have any idea what’s going on. Thus, our present state is similar to birth pains.

We have been through similar states at other times in history, although they weren’t as tragic or radical to justify calling them a “birth.” We regard them as developmental or transitional phases in human history.

And yet our current state is different. In the past we’ve always striven to reveal or attain new heights. We foresaw potential revolutionary conditions of a social or technical nature, and change was effected as a result of new breakthroughs, whether via discovery of new lands, inventions of innovative weapons, or implementation of new technologies such as the Internet, which have unveiled a completely new level of connection between us.

The difference is that those innovations never have been global in nature. They have never influenced all aspects of human life, nor have they impacted humankind on a larger scale, including every country and continent, every family and individual. Nowadays, the new revolutionary (evolutionary!) spin involves all of the above.

Disoriented and bewildered, we’re growing increasingly aware of the fact that something is happening, but we’re not quite yet certain what that “something” is. The crisis we’re experiencing is similar to the state that precedes delivery. It presses us more and more with each passing day, both individually and collectively.

Just as we cannot seem to solve the tumbling economy, we are utterly powerless to reverse the decades-old trend of families falling apart or the astronomical rise in depression, suicide and substance abuse. If anything, the one common denominator here is that in all areas of our lives we suffer from a complete absence of understanding as to the root cause of these problems.

Moreover, for the first time in human history, this is happening on a global, integrated scale. There’s literally “nowhere to run” to escape these issues, even if one had the means. And the worst thing is that we don’t know what the future holds.

In revolutions past, the social and economic structures we aspired to were more progressive than the ones they replaced. The abolition of slavery, for instance, paved the way toward a more civilized society. Even though drastic changes triggered new uprisings, religious and civil wars, people nonetheless anticipated a brighter future at the end of it all.

Presently, however, we all are undergoing a global process the likes of which we’ve never seen. This process encompasses not only the society and the individual, but actually extends to climate and ecology. (Looking back at the evolution of our species, global warming and cooling periods have always necessitated vast adaptations in humankind, such as huge communities being forced to migrate from Siberia and Asia to Europe.)

Whereas in the past revolutions happened for concrete reasons (climate change, new technology, despotic regime, etc.), today all the changes are happening simultaneously and on every level. Simply speaking, people no longer can reconcile with the world we live in.

Even the systems we have come to depend on for our very survival are on the fritz, including the food industry, the job market, the family unit, the educational and security systems, and so on.

We have arrived at a general state in all areas of our lives where nothing seems to work as it should. And with the tools currently at our disposal, we cannot predict with any degree of certainty what our future phase on this evolutionary path might look like.

Is it possible to study the laws of this new integrated world and thereby learn to meet its demands? Can we look ahead and be sure that the path we’ve chosen is correct? Can we calculate our future beforehand?

If the answer is yes, we can facilitate our progress and avoid needless wandering in darkness. If not, we will continue making the same old blunders, only now the stakes are much, much greater.

In light of the above, we must aim to develop an educational course for the whole world. The goal is as vital as it is straightforward: to open people’s eyes to the new reality we find ourselves in, to glimpse a future that’s not only possible but unavoidable (indeed, for the baby there’s only one way out), and to teach the world how to transition from the existing state to the future in the quickest and most painless way possible.